Can I Still Get The Top 3 Rankings In A Google Search?

Is It Possible Do Dominate Search Engine Rankings?

SEO domination in the past suggested that it was possible to dominate a keyword search by obtaining the top three listings in the Search Engine Results Pages (SERPs). In fact this was entirely possible especially in small population geographic target areas, or for less competitive key terms. We’ve been able to achieve these results for several client websites in several niches. .

Our website for Vancouver WA SEO, continues to rank at the very top of Google SERPs both for Organic SEO and for Google Local Search, aka Maps Listings. Since the latest Google algorithm update, our site has increased in visibility, according to SEMRush: 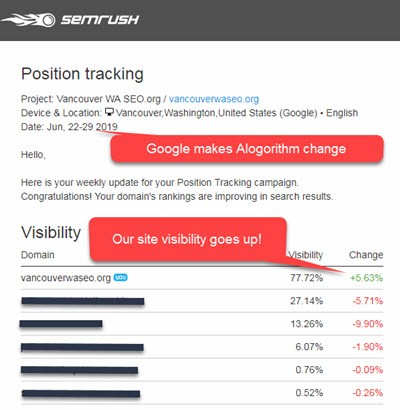 Once again, Google has now changed the rules, by limiting the top tier results to two listings for a website. That includes all web pages and, perhaps, subdomains as well. We have more on this topic; from Search Metrics – here is information about the latest Google Algorithm update.

With its Site Diversity Update, Google want to show a wider range of websites in its search results. From now on, domains
should no longer be able to occupy more than two ranking positions on a single SERP. In this post, we take a look at how
much diversity has really been created and we also analyze the connection between search intent and site diversity, as well
as examining the added relevance this update gives to SERP Features like images, videos and Featured Snippets.

As is now commonplace, Google, via Danny Sullivan, used its Search Liaison twitter account to announce that a change
had been made to its search results.

How much impact has the Diversity Update had?

The concept of the Diversity Update is clear – to limit the number of domains appearing with multiple URLs in the SERPs. This raises the question of how widespread this before the update. How common was it to find the search results flooded with organic rankings from a single domain?

To provide an answer, we have compared the search results for a set of thousands of keywords from March 2019, a few months before the update, with June 2019, just after the Diversity Update was announced by Google. For each keyword, we can measure the diversity of the search results according to the maximum number of URLs in the top 10 that belong to a single domain.

The main developments are:

Our research for sites we manage indicates several #1 and #2 rankings for the identical keyword. We cannot locate any combination of keywords and geographical modifiers where our clients, or any other website, has three consecutive listings at the top of the Search Engine Results Pages (SERPS).

Did Google’s Site Diversity Update Live Up to its Promise?

On June 6th, on the heels of a core update, Google announced that a site diversity update was also rolling out. This update offered a unique opportunity, because site diversity is something we can directly measure. Did Google deliver on their promise, or was this announcement mostly a PR play?

There are a lot of ways to measure site diversity, and we’re going to dive pretty deep into the data. If you can’t wait, here’s the short answer — while Google technically improved site diversity, the update was narrowly targeted and we had to dig to find evidence of improvement.

How did average diversity improve?

Using the 10,000-keyword MozCast set, we looked at the average diversity across page-one SERPs. Put simply, we measured how many unique sub-domains were represented within each results page. Since page one of Google can have less than ten organic results, this was expressed as a percentage — specifically, the ratio of unique sub-domains to total organic results on the page.

How Can You Help Me Get Top Rankings?

This may come as a bit of a surprise, but most of our clients get at one listing in the top 3 for their most important target key words. While other SEO companies struggle to get their client sites onto the first page, at Vancouver WA SEO, our goal is more likely to see how many spots we can get in the top 3 listings for target keywords. Very often we’ve been able to achieve a clean sweep of the #1, #2, and #3 rankings. If Google is going to limit us to the top 2 listings, well, we’ll take it!.

Find out how we can help you get the best visibility for your website, boost traffic to your site and get more people contacting your business and purchasing your products or services:
Schedule an Appointment for a free consultation.

More information about: Vancouver Wa SEO at the Local SEO Vancouver WA web page. When you need quality SEO and Internet Marketing, call us at (503)828-6268.